Rethinking the history of Violence, Health and Care in Wartime, c. 1860-2000s

We are pleased to invite submissions for an online workshop exploring the history of violence against health and care, broadly conceived, in wartime.

Understandings of the impacts of attacks on healthcare have changed significantly within the last ten years. This is partly the results of the launch of the International Committee of the Red Cross (ICRC) programme’s ‘Health Care in danger’, Médecins Sans Frontières’ ‘Medical Care Under Fire’, the Safeguarding Health in Conflict Coalition (SHCC) and World Health Organisations (WHO) media and research campaigns. It is also partly due to the heightened reports of attacks on healthcare in Afghanistan, Iraq, Libya, Syria, South Sudan, Ukraine, Yemen (and elsewhere) and subsequent adoption of the Resolution 2286 by the UN Security Council on the Protection of civilians in armed conflict in May 2016. Within this new climate, many academics and policy-makers have searched for historical precedents to better understand current debates about the definition(s) and impacts of attacks on healthcare workers and facilities. This renewed interest in the history of international humanitarian laws (IHL) offers an important opportunity to gain clearer understandings of the origins, development and broadening of the international legal framework established to protect healthcare workers and facilities (Breitegger, 2013; Hull, 2014). To begin with historians have shown that the phrase itself did not enter into common parlance until the early 2000s, and that the questions of violence against medical organisations was prior to that framed around the question of ‘medical neutrality’ (Abu Sa’Da, Francoise Duroch and Bertrand Taithe, 2013). Significantly, the 1864 Geneva convention detailed the objects to be protected by laws but did not specify what might be defined as an attack on healthcare. Historians have also cast important light on key actors involved in the advocacy for the protection of IHL. This re-energised historiography has also traced significant continuities in the motivations and justifications of perpetrators of violence against healthcare (McLean, 2019), showing that perpetrators have often legitimised attacks on hospitals by framing them as ‘shields’ and refuge of combatants that are harmful to their adversary (Gordon, Perugini, 2019). Together, these studies have highlighted a crucial need to historicize the concepts of ‘attacks’ and ‘impacts’ on healthcare, for different meanings have become attached to it throughout the twentieth and early twenty first century (Cotter, Polinski, 2020; Mahieu, Blanchet, Haar, Fast, Rubenstein, Kostandova, 2020).

Despite these important developments in the field, existing historiography on IHL tends to privilege a top-down approach, focusing on the diplomatic, political and legal histories of the protection and violation of legal norms, frequently with a strong European and North American centric bias. It also tends to neglect the experiences of medical staff working under fire. Meanwhile, social and cultural historians of military medicine have (until very recently) neglected the physical, cultural and emotional impacts of instances of violence on medical workers and patients (Potter and Acton, 2015; Van Bergen, Eric Vermetten, 2020). These problems are the driving factors behind this workshop. The aim of this workshop is to bring together scholars working on the topic of violence, health and care in wartime and discuss the new approaches that historians have taken to examine the framing, impacts and legacies of violence and attacks on medical spaces. How have historians defined, understood and examined instances of violence against healthcare workers in wartime? How have they defined and examined the impacts of attacks? What are the conceptual and methodological challenges of constructing both ‘bottom up’ and ‘global’ histories of violence against healthcare? Where are the archives of violence against medical workers and patients? How can we write both international and local actors, insiders and outsiders, perpetrators, bystanders and victims, into this history? What can the history of gender bring to the history of the protection and violations of IHL at different moment of mass violence? Can historians build on the ‘material turn’, ‘emotional turn’ and ‘sensory turn’ to better understand the impacts of incidence of violence on health and care?

Amid an ongoing cycle of commemorative events for the adoption of the Resolution 2286 by the UN Security Council on the Protection of civilians in armed conflict, academic and public interest in the impact of attacks on healthcare is growing. We hope that participants will bring fruitful new elements to the ongoing reflections about the definition and impacts of attacks against healthcare, while offering valuable new perspectives on the history of violence and health in wartime.

We particularly encourage proposals in French or English on the following topics:

The day will include panels of twenty-minute papers followed by a 30-minute discussion.

We aim to publish some of the papers presented during the day in a peer-reviewed journal.

Please submit 300 words proposals in French or English along with a 1-page CV to Laure Humbert laure.humbert@manchester.ac.uk.

We will aim to let you know the outcome of your submission by early April 2021. 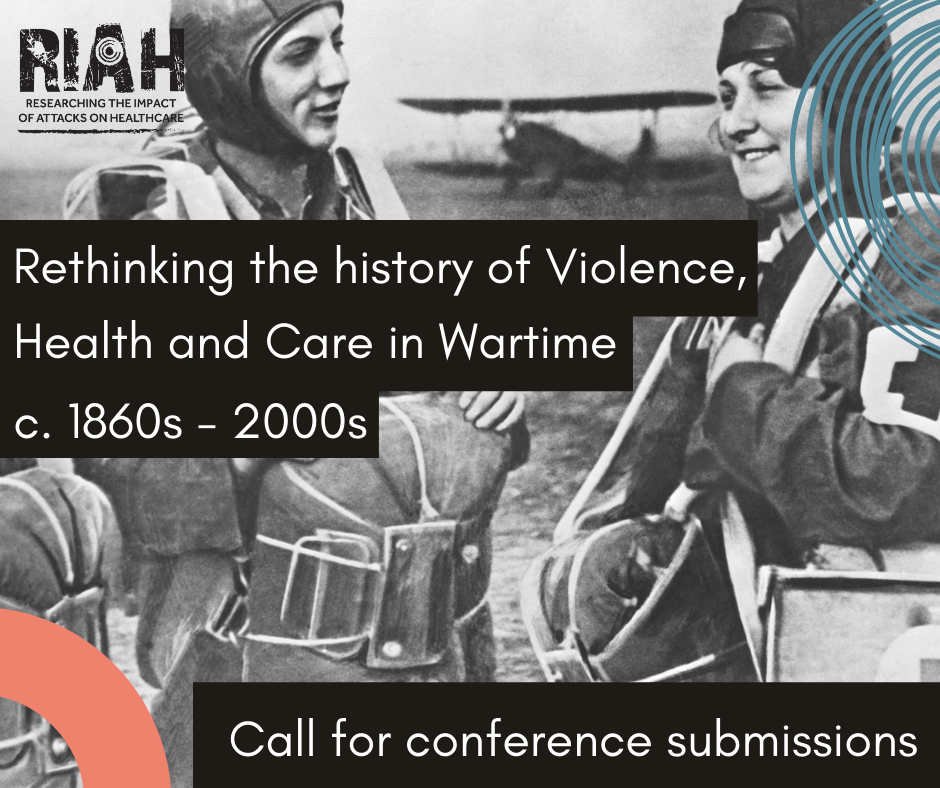